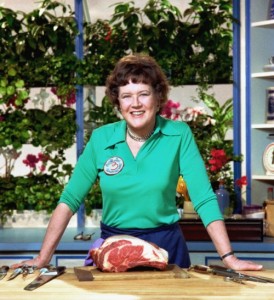 Wow! Count me in along with many others who are paying homage to Julia Child, in honor of her 100th birthday! She taught me the fundamentals I still use to this day. I was already a cooking enthusiast when I met Jean-Pierre, the Frenchman I married in my 20s, but hardly produced the kind of French dishes that he so favored. It was amazing serendipity to come upon Julia Child’s weekly PBS program that first summer I was married…and living alone in a new city. Jean-Pierre was off  to teach French out-of-state,  so I was thrilled to have discovered  Julia’s show, which captivated me. I was also excited to know that when Jean-Pierre returned, I could surprise and delight him with my forays into Mastering the Art of French Cooking. For more than a decade, I became a devoted fan of the show, rushing home on occasion to watch it (no DVRs in those days), and cooking almost exclusively from her first two books. Of course I tweaked them a bit. In the service of better (and sexier) health, I called myself a “Julia minus the butter” cook: I often (but not always, see below),  passed on her classic mantra to “swirl in additional butter just before serving.”

What more can be said? I simply adored and admired this talented, down-to-earth, unpretentious woman…she started her career late, she evolved with time, was always fun/entertaining to watch, even in her later years when she peered over the shoulders of Jacques Pepin and other chefs, and was so real.

To celebrate Julia Child’s birthday I created a meal for two to pay homage to one of her famous French dishes, Steak au Poivre, a tweaked version of which is included in Simple Sexy Food.           Bon Appétit et Bon Amour!

Flat-leaf parsley or watercress for garnishing

2.         Trim excess fat from the steaks and dry the meat with paper towels. Sprinkle half of the peppercorns on one side of each steak and press into the meat. Repeat on the other side of the steaks. Cover with wax paper and set aside for at least 30 minutes or up to 1 hour to allow the pepper flavor to penetrate.

4.         Add the oil and butter to a small-to-medium, heavy skillet just big enough to hold both steaks in one layer. Heat on medium-high until the butter foam begins to subside.

5.         Sauté the steaks on one side for 3 to 4 minutes, keeping the fat hot, but not burning. Turn the steaks and cook the other side, about the same time for medium rare, less for rarer meat (see Tip.)

6.         Remove the steaks from the pan, sprinkle with salt, and keep warm in the oven or warmer drawer.

7.         To make the sauce: Pour out the fat but do not clean the skillet. Set the skillet over medium heat and add the 1 1/2 teaspoons butter and shallots. Cook slowly for 1 minute, then add the stock. Raise heat to high and boil down the liquid rapidly, while scraping up cooking bits and juices.

8.         Add the Cognac and boil rapidly for about 1 minute to evaporate the alcohol. Remove the pan from heat and swirl in the softened butter, 1 1/2 teaspoons at a time.

9.         Pour the sauce over the steaks and garnish with parsley or watercress. Serve immediately.

Simple Sexy Kitchen Tip: Steak is sexiest when it’s tender, juicy, and blushing inside with rosy shades. If you’re used to steak cooked through, be adventurous and try it medium rare, just this once. It might inspire a little adventure in the bedroom as well!

Survey Secrets: When participants were asked to create their own sexy menu, steak was among the top main dish choices, particularly among young men, 22-25. Potatoes were a favorite pairing, which just goes to prove that certain mainstay combinations hold definite aphrodisiac appeal.

Aphrodite Says: Peppercorns are spicy berries native to India or Malaysia. Their aphrodisiac reputation as sexual “energy” boosters dates back thousands of years. They are mentioned in both the Kama Sutra (2nd century, BCE) and in the 15th century Arabic text, The Perfumed Garden of Sensual Delight. Like sweet peppers, their color variations reflect changes with time. At the time of picking, they’re green; as they dry in the sun, they transform from red, to yellow, to brown, and finally to black. If the black husk is removed after the drying process, the result is white peppercorns, the very spiciest. Pepper ground from peppercorns was so valued in early European times that it was used as currency. Pepper in all forms stimulates saliva flow, so it’s a perfect choice to “whet” your appetite in many ways!